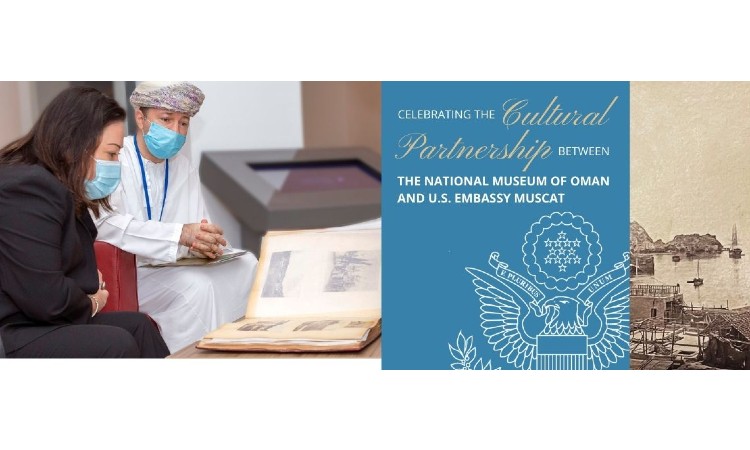 With support from the U.S. Embassy in Oman, the National Museum of Oman recently finished restoring a photo album that the first United States Consul to Oman, Louis Maguire, presented to Lt. Colonel S. B. Miles, the British Political Agent in the Gulf, on September 6, 1885. This photo album contains images historically significant to Oman, including the oldest known photo of Muttrah, Al Rustaq Fort, Jabreen Castle, and the beehive tombs. The 88-page album also contains the second-oldest known photograph of Muscat and photos from inside the U.S. Consulate at the time. Not only important to Oman, but these significant photos also illustrate the long, historical ties between the United States and Oman.

U.S. Ambassador to Oman Leslie M. Tsou recently visited the National Museum to view the restored album and celebrate the successful completion of the cultural preservation project with National Museum Secretary General Jamal bin Hassan Al Moosawi. The project began in August 2019 with funding support from the U.S. Department of State’s Ambassadors Fund for Cultural Preservation (AFCP). The joint U.S.-Oman achievement exemplifies the strong partnership between the two countries in many fields and represents a significant contribution to the preservation of cultural heritage worldwide.

On this prestigious accomplishment, U.S. Ambassador Tsou said, “Preserving cultural heritage is and will continue to be important to both our countries. Our relationship is strong and getting stronger. We have so much to learn from each other and I see this collaboration continuing well into the future.”

Furthermore, National Museum Secretary General Jamal Al Moosawi said, “I express our sincere gratitude for the ongoing support by the U.S. Embassy in Muscat to the National Museum, in particular the generous grant received through the AFCP, which had enabled us to successfully accomplish the conservation and restoration of the photographic album of Louis Maguire, U.S. Consul to Muscat. We look ahead with excitement to explore other joint endeavors that enhance Oman-U.S. relations.”