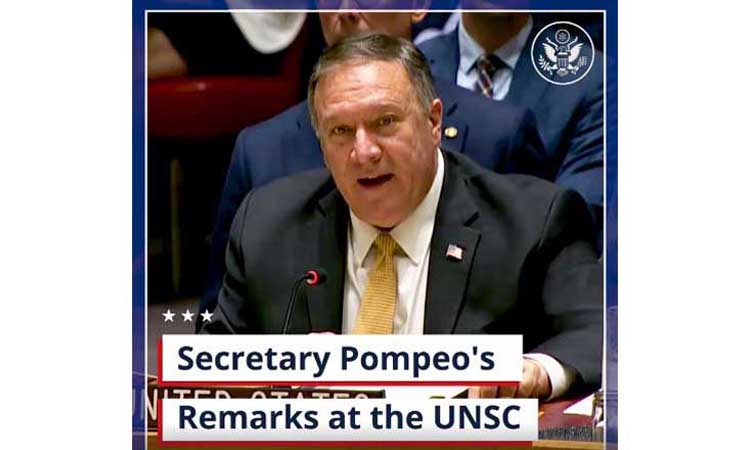 SECRETARY POMPEO: Thank you. Thank you. Good afternoon, and thank you, Mr. President, and thank you, Ms. Viotti for your briefings. I also want to thank our Polish friends for using this council presidency to confront the complex challenges in the Middle East. As I argued in January of this year in Cairo, the Trump administration is reviving America’s leadership role in the region by building and supporting coalitions to tackle regional challenges. These aren’t talkfests; we care about outcomes, not gestures. And we should consider what’s been accomplished in just seven months.

We helped dismantle ISIS’s physical caliphate and we continue to work with 79 partners in the defeat ISIS coalition to help the region recover from that menace. We’re working closely with the UN Special Envoy Martin Griffiths to help bring peace to Yemen. We’re facilitating new links between Israel and her Arab neighbors through the Warsaw ministerial and follow-on meetings that the president just discussed. We organized the Bahrain workshop in June to bring together government, private sector, and civilian leaders to help improve the lives of the Palestinians. We hosted the second ever Ministerial to Advance Religious Freedom last month. Protecting religious minorities in the Middle East was the centerpiece of that event. And most recently, the United States launched our effort to protect international shipping in the Strait of Hormuz. We welcomed the United Kingdom and Bahrain as partners, and look forward to other nations joining this mission to protect freedom of the seas.

These are precisely the kinds of multilateral efforts the United States supports. They’re meaningful, they’re effective, and they reflect the values of freedom-loving societies which this council should be working to uphold. But now is our opportunity to do more. Just look at the challenges facing the region. Conflict in Libya still rages. More than five and a half million Syrian refugees, and nearly six million internally displaced Syrians have yet to return to their homes because of continuing violence. The GCC rift has not fully healed. Many countries fail to honor their people’s basic human rights. And radical Islamist terrorists and their financial benefactors are looking for new weaknesses to exploit. And of course, the Islamic Republic of Iran and its proxies continue to foment terror and unrest in Iraq, Lebanon, Syria, and Yemen with devastating humanitarian consequences.

Since the United States declared our intention to bring all Iranian oil purchases to zero in April, the ayatollah has gone all in on a campaign of extortion diplomacy. Here’s just a short list of what the regime has done since July: On July 1st, Iran surpassed its 300-kilogram limit on its low-enriched uranium stockpile in defiance of its nuclear commitments. On July 2nd, the Iran-backed Houthis attacked Abha Airport in Saudi Arabia, and they’ve continued to do so since that time. On July 8th, Iran reached levels of enrichment of about four and a half percent, breaching its nuclear commitments, which cap enrichment at 3.67 percent.

And on another Iran-related note, we are already tracking very closely the JCPOA provisions expiring in October of 2020, namely the UN arms embargo and the travel restrictions on Qasem Soleimani. The whole world is able to track them, too. We now have a countdown clock on the State Department’s Iran webpage. Time is drawing short to continue this activity of restricting Iran’s capacity to foment its terror regime. The international community will have plenty of time to see how long it has until Iran is unshackled to create new turmoil, and figure out what it must do to prevent this from happening.

Clearly, from Aleppo to Aden, from Tripoli to Tehran, greater cooperation in the Middle East is needed more than ever. We need fresh thinking to solve old problems. That’s why Poland and the United States have created the Warsaw Process and its working groups, which were recently announced. The Warsaw Process is the product of this year’s Warsaw Ministerial to Promote a Future of Peace and Security in the Middle East. The creation of the working groups is another iteration of the United States mission to take on Middle East challenges with our friends, allies, and partners. The seven new working groups will focus on cybersecurity, human rights, maritime and aviation security, energy security, missile proliferation, counterterrorism, and humanitarian issues and refugees.

We call for all nations which have been invited to attend the initial meetings of the first five of those groups this fall, and we express our gratitude to Bahrain, Romania, and South Korea for joining Poland and the United States in hosting them. No one country will be the subject of these discussions. All nations will be heard and all voices will be respected. And we continue to work through the Warsaw Process – as we continue to work through the Warsaw Process, we will look to reconvene nations in 2020 for a follow-up to the Warsaw ministerial. I hope that you all will be there.